Behold the world of freethought: a deep, vast commonwealth, multifarious, diverse and prismed as a snowflake. You won't find a lot of agreement here. But why should you? Freethinkers are a heckling, independent lot. What you will find is discussion, challenge, opinion, inquiry and rich food for your thought. In brief, this is a place to learn more, to explore other groups like AOF, and some very unlike. A place to challenge yourself, to grow your horizons. It may seem a lot. But do not worry, you have the rest of your life to do your homework. You’ve barely begun.

Sister Groups within the Sacramento Community of Reason

o Our Thoughts Are Free (and it's evil twin, Brainsofteners.com)

o Reason Center, a home and venue for all of us

o HAGSA, the Humanist Association of the Greater Sacramento Area

o Compassionate Humanists, in Roseville, with their Meetup Group

o AgASA, the Atheists and Agnostic Student Association of UC Davis (and its Wikipage)

o FACTS, aka the First Atheist Church of True Science

o The Center for Liberty of Conscience, formerly k.a. the Interfaith Liberty Foundation

o National Day of Reason - Each year, the 1st Thursday in May

o American Atheists, the group that began all the hoopla

o The Secular Coalition for America

o Openly Secular, seeking an end to discrimination against secularists

oTruth Seeker Publishing, the oldest freethought journal in the West

o The Freethinker (from the Brits)

o Military Association of Atheists and Freethinkers, atheists in foxholes do exist!

oNo More "In God We Trust", because God on money is just wrong

o We Are Atheism

o Independent Investigations Group, investigating paranormal claims from a scientific pov, because somebody has to

o LogiCal-LA, a place for critical thinkers to meet & schmooze

o Americans United for Separation of Church and State

o The Institute for Church-State Studies

o Atheists Websites Directory. You think this is a big list? Heh.

o Atheism Webrings, a collection of collections of freethought websites (will keep you busy)

o The Infidel Guy has his own webcast!

o The Black Sun Journal, another ex-minister speaking out

o The Skeptics' Bible is a useful reference!

o HolySmoke and its Archive

o The Infidels, aka the Secular Web, aka the Internet Infidels

o The Skeptical Review archive, by J. Farrell Till, a very-ex minister

o The Evil Bible, all the scuttlebutt

o Atheist in America, aka "FlameWarrior"

o Rosa Rubicondior, a blog of religion, science & politics by an atheist-humanist

o The Secular Right, a blog of conservative freethought

o The God Contention, with religious & secular answers to the Big Questions

o The Savage Truth by the Right Rev. James Huber (he spells it 'Huger' sometimes)

o The Pissy Bishop is dedicated to freethought expression

o No Honor in Gods

o Anonymous vs Scientology - Why they protest

o Patheos Atheist, the Atheist Voice in a conversation of faith

o The Religious Right in California
(a 1992 chart from Project Tocsin, a bit outdated, still fascinating)

o Church of the Flying Spaghetti Monster, "FSM" sightings the world over!

o United Church of Bacon: Hail Bacon, Full of grease, the Lard is with thee

o The Wittenburg Door, a genuinely likable Christian site (they do exist)

o Scouting for All

o After School Satan, bringing the Dark Lord to our public schools

o LifeRing, yet another

o The Atheist Census - Stand up, be counted!

o The Case for Common Descent (29+ Lines of Evidence)

o The Richard Dawkins Foundation for Reason and Science

o Why Evolution is True

o Bible and Science (or, the Institute for Biblical & Scientific Studies)

o Earth and Life - One of the neatest science posters ever, courtesy of The Brights

o The Radial Tree of Life (Hillis Diagram), another!

oThis Day in Church History, a Christian site with a sense of humor (archived)

o History of Religion and the Geography of War, splendid animation

o The Bible - Who Wrote it, Compiled it, Edited it

(by the Staff of The Straight Dope, an epic in five parts)

o Jesusquest (archived) - Who was this Jesus, anyway?

o Adherents.com, for statistics on religion

o Epiphenom, the Science of Religion and Nonbelief

o Meta-religion - Still not sure what this is ...

o Ex-Minister, for clergy who walked away

o The Clergy Project, another resource for doubting clergy

o Apostates of Islam (please check your jihads at the door)

o Not My God

o Sacramento Blood Source
Schedule a donation now. When you do, please use the AOF Blood Source ID# 4857

o The Freethought Store (on Amazon.com)

o The Bank of Wisdom (freethought CDs, posters & busts - no not that kind)

Not enough? Then visit the Atheism United Huge List of Atheist/Agnostic/Skeptic/Humanist Websites.

Raise money for Atheists and Other Freethinkers simply by searching the Web!
(Or Shop to help AOF!) 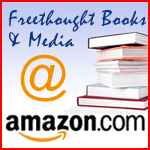