Why "Atheists and Other Freethinkers"?

The open right to believe or not believe in a deity is a basic right of conscience afforded to every American by the First Amendment of the United States Constitution. But our society has a certain cultural bias against persons whose worldview is naturalistic. Those openly “deity-free” are marginalized and labeled “nonbelievers,” despite having sincere convictions, while “persons of faith” find acceptance as full participants in our society.
AOF affirms the right of an individual to hold a worldview free of supernatural belief and to express it without discrimination or penalty, and without denial of a citizen’s full participation in American life.
One need not be an atheist or a freethinker to be a member of AOF, but one must support the stated purpose of the organization and pay annual dues. Supporters of AOF recognize the need to have a strong wall of separation between church and state that prevents religious intrusion into government (and vice versa). To protect liberty of conscience for all citizens means ensuring freedom from, as well as of, religion.

What is a Freethinker?

A freethinker is a person who forms his or her opinions independently of tradition, authority, or established beliefs. Freethinkers reject dogma and creeds. When weighing the evidence for religious tenets put forth by others, they reject the supernatural and rely on logic combined with empiricism.

What is an Atheist?

The word “atheist” has suffered much misuse and abuse over time. Its meaning is straightforward. An atheist is a person who is without belief in God, a god, or gods.
Contrary to common belief, the vast majority of atheists do not declare that a god is impossible, but they regard the probability as exceedingly slight.
Over thousands of years, verifiable evidence of the existence of a god or of any supernatural entities has been lacking, and so atheists deem it highly unlikely that they will encounter such evidence within their lifetimes. The “burden of proof” concerning the existence of God (or any gods) rests upon those who make the claim that any supernatural beings exist. 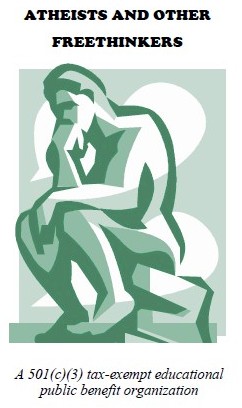 The Atheists and Other Freethinkers organization …

·         Engages in diverse and ongoing social activities, such as “movie nights,” dinners and solstice celebrations

·         Conducts educational and charitable activities in the community

Newsletter: You can request email delivery for free -- or for a small extra charge, printed delivery by postal mail

Unless announced otherwise, general meetings occur monthly. However major special events (such as Darwin Day in February and Freethought Day in October) will typically change the schedule. To be sure, check the Events Calendar or the Newsletter!

Our Statement of Purpose

The purpose of the nonprofit organization Atheists and Other Freethinkers is to promote the civic understanding and acceptance of atheists and freethinkers in our community.  Through its educational programs, project, and publications, AOF extends atheistic perspectives concerning the separation of church and state and the right to think and speak freely on these perspectives.

AOF was established in 1993 in Sacramento, California. Initially a nonprofit educational association with bylaws, officers, and a board of directors, it became a 501(c)(3) nonprofit public benefit corporation in 2002.