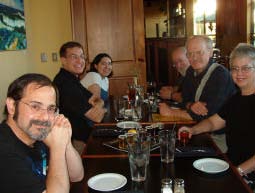 Who are we? What is this loose-knit alliance of rebel minds, this colony of feral cats, seeking a way and sometimes losing it? We're much like you: idealistic and petty, quarrelling and loving, courageous and cowardly, deluded and inspired, zealous and uncertain, empowered and weak, determined, tired, dreaming, funny, stubborn, foolish, occasionally wise, sometimes right, and often wrong. With a hungry spirit and occasional sparks of anger, we tug at the chains of unquestioned dogma that have fettered minds, broken tender bones, shed innocent blood, orphaned too many children, and in our view brought humankind only nearer to ruin. Politically we are all over the map, conservative and liberal, moderate and progressive, sometimes libertarian, ultimately nonpartisan, pixels in a spectrum of free will. We dance and we weep. We learn as we go. We try to see our own failings too, knowing that history is a human effort – it is not destiny, it does not rain on us from heaven, but flows from the fonts of those who rise to make a difference. We are very much like you. Our spiritual antecedents have been here, waiting usually quiet and unseen, for a long time. Your story grows into ours, and in a sense, you are our true makers.

Not all of us are atheists of course. But if we can uplift how society sees and treats atheists and other intellectual minorities, here in a nation that oft-fails the Constitutional ideals of freedom of conscience for all, then our work has not been in vain.

On the immediate scene, AOF members meet to discuss, debate and investigate new ideas. We have monthly programs, host parties, celebrate, engage in public service, and try to be better citizens and grow more visible in the public square. Ultimately we hope to be a kernel or nucleus about which may condense the crystalline idea of a secular nation, truly neutral in matters of faith and conscience. We welcome you to join us, please join us, as we dream our way to the future.

AOF is a 501(c)(3) non-profit educational association, maintaining affiliations with the Atheist Alliance of America, Council for Secular Humanism, American Atheists, and the American Humanist Association, and also part of the Sacramento Coalition of Reason.

The purpose of Atheists and Other Freethinkers is to promote the civic understanding of atheism and the acceptance of atheists in our community. Through educational programs, projects, and publications, AOF will extend secular perspectives, including the separation of religion and government and the right to think and speak freely on these perspectives.

The vision of AOF is a civic environment that invites and honors secular views in educating the community, and solicits the participation of unchurched citizens in developing social policy, social norms and legislative action.

The commitment of AOF is to foster and facilitate these values:

Come on out and "pitch-in" if you are willing and able to help make the stretch of highway beautiful and less hazardous to area wildlife.

Information:
AOF has helped maintain the two-mile stretch of earth and highway between Elkhorn Boulevard and Elverta Road on Highway 99 since October 1995. We need your help to keep it going.

So please mark your calendars, and help us proudly represent AOF to the tens of thousands of drivers who weekly pass our award-winning AOF Adopt-A-Highway signs.

Date and Time:
Typically AOFers get out to the highway bi-monthly, but in times of heavy debris we may go out the following month to finish the job. Check the events section for news, or contact AOF for more info, either by e-mail: info (at) aofonline (dot) org, or by visiting the Contact Page.

Directions:
Travel north from Sacramento on I-5, past Arco Arena, to the "Highway 99 -- Yuba City, Marysville" exit. Take that exit, and less than one mile north, exit at Elkhorn Boulevard. We meet at the CalTrans Park-and-Ride parking lot, west of the Elkhorn exit.

What to bring:
Be sure to bring liquid refreshment. You may also wish to bring a fanny pack, sun screen, "zip-ties" for the garbage bags, and/or watch.

For those interested, Cal-Trans now collects recyclables separate from the trash, so bring a plastic bag if interested in doing that.

Compassionate community members in the city of Davis have developed a secular solution to the problem of hunger, and they need our help.

Please come out and help us! Besides the warm glow helping others creates in your heart, it is a wonderful opportunity to meet new people and socialize with your friends in AOF. The Davis Community Meals core staff will perform all food preparation and kitchen work. AOF & ffriends will set up the tables, serve, put up the chairs & tables, and sweep. And participants may enjoy their own free dinner if they so choose.

Driving directions:
West on 80 from Sacramento past Davis
North on Hwy 113
Exit on Russell Blvd and go east
Left on Sycamore Lane
Right on Hawthorne Lane
The hall is on the right

Parking instructions: Plenty of parking in the parking lot.

In early 2014, AOF began to work with other local freethinkers to supply books to youth at Sacramento Juvenile Hall, children previously bombarded with hyper-religious propaganda. The first report on this effort was so encouraging, and so uplifting, we share it with you now.

Amazing! They were elated to receive books to read about atheism. They had questions ... tons of 'evil' experiences and "devil possessions" to ask about. I saw minds open right before my eyes. I'm not sure I've ever seen so much information relished before. Oh! I was the first-ever atheist EVER to come talk at Sacramento's juvenile hall - EVER! They get church folks 2 to 3 times each week, who, I'm told, yell and threaten hell and get mad if you question them. The probation officer said she's never seen the girls so engaged in a "class" before. They were on the edges of their seats, on best behavior, for over 2 hours and didn't want to stop. In fact, 10 minutes past our time I mentioned the notion of logical fallacies, and they pleaded with the officer to let me stay 5 more minutes to tell them some. So, I did and they were blown away that what happens to them in arguments is recognized and even has labels. They couldn't get enough. My best moment was at the end when a girl who had made a promise to God that she'd never deny his existence if he would just let her give birth without handcuffs (which happened), but she told me she now realized it was her who made that happen, not a god. "I did it myself," she said proudly. She came to that conclusion on her own- we hadn't talked about that. I didn't push anything on them, I was just real. They responded so well to someone who wasn't "shittin' them". It was like offering water to people dying of thirst. The of-ficer told me their most difficult girl they've ever had was in my class, and she was a puppy trying to tell me things and ask wonderful questions. Another, I'm told, goes around spouting her Christianity, but last night she ended up firmly wanting to work for AU, which involves believers in the fight for separa-tion of church and state. One girl asked if there could be such a thing as a "Christian atheist". They eagerly listened to definitions of atheist/agnostic/freethinker wanting to find themselves there. They listened! Oh my gawd did they listen! I never had to say anything twice. When I explained that faith has two meanings, they totally got it immediately and almost laughed they were so happy to understand that finally. The whole 2 hours was like that. Of course I'm going back. If anyone would like to join me, or do this on your own, please let me know. I don't have enough time to give these girls what they need, and they want it on a regular basis. And just like I wasn't shittin' them, they weren't shittin' me, either. It was real. They had genuine questions and fears. They were totally open to my responses, and when they were skeptical I honored their skepticism. They were never rude or bull-headed. Very open. No one has ever suggested to them that there is no such thing as sin, or ever asked them what evil the devil actually did in the bible, or pointed out how much religion is trying to take away women's rights, and on and on... It was amazing talking with these girls. They felt empowered. I felt their lives. We both gained.

If you would simply like to support this project (donate books), one way is via the “Books Behind Bars” Wish List on Amazon.com. Items purchased will go directly to AOF, and we will deliver them to the eager, knowledge-hungry children. Note, all purchases are a tax deduction through Atheists and Other Freethinkers, Tax ID #68-0325762. Thank you for helping!

AOF supports a renewed legal drive to end religious inscriptions on money, and to restore American currency to its original neutrality toward religion. See here for this special project's website. History's lesson is that State and Faith both benefit from a benign mutual independence. As James Madison said, "Every new & successful example therefore of a perfect separation between ecclesiastical and civil matters, is of importance." And he said, "Religion & Govt. will both exist in greater purity, the less they are mixed together." If you agree, simply click the image to donate to this cause. Donations are tax deductible, of course.